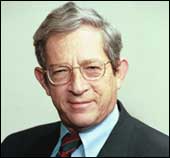 Professor Stephen P Cohen, doyen of South Asia experts in the US, is a man in much demand these days. Since United States President George W Bush [Images] and Indian Prime Manmohan Singh [Images] announced their agreement to go ahead with civilian nuclear cooperation, Dr Cohen has been sought after for his analysis of the pros and cons of such a deal.

PM's trip to the US

Immediately after signing the deal, Dr Cohen conducted a marathon Washington Post online discussion; he has been asked to comment by other sections of the mainstream media, and was also invited by Harvard's Nieman Foundation, which conducts the university's journalism program, to post pertinent questions journalists should ask about the agreement.

Dr Cohen, currently Director of the South Asia Program at the Brookings Institution, the famous think tank in Washington, DC, voiced his thoughts on the deal in an interview with rediff India Abroad Managing Editor Aziz Haniffa.

You have argued in various fora that the hype over the US-India nuclear agreement may be overshadowing several other important agreements between the two countries. You have also said that if the nuke deal doesn't pan out, it could jeopardise the otherwise blossoming relationship. Could you elaborate?

I believe a number of other agreements, both in the Joint Statement and also in course of the defence minister (Pranab Mukherjee's earlier) visit were path-breaking in many ways.

I was particularly fond of Prime Minister Manmohan Singh's idea of having American universities link up with Indian agriculture. This was the basis for much American academic development in the 1960s, and I got my job at the University of Illinois because Illinois was developing two Indian agriculture universities. So it was a great programme of technology transfer, and it transformed India's agriculture -- which has now fallen behind again.

This kind of relationship is very important for India and of course, it keeps the academic window open. The academic window is something I am very concerned about because even today, it is harder to do work in India than it is in countries like China in terms of getting visas and access.

I thought the other great breakthrough was the US-India CEOs Forum, and if that is properly staffed and develops proper backup, then that could be an important vehicle for dealing with both opportunities and problems in the economic relationship between the two countries.

Does all of this mean you are opposed to the nuclear agreement?

No. I've always been, in principle, in favour of exactly this kind of agreement. Now exactly what they agreed to, I don't know and I can't commit myself to something that still probably has to be negotiated.

In fact, one of the things that concerns me is that this was done without any consultation with Congress here, as was evident during the House International Relations Committee hearing, when several members bitterly complained about this, and I assume without consultations with the opposition parties in India.

So I am not sure what kind of political checks or what kind of political half-life it will have. But I've always been in favour in a sense developing and getting around the nuclear issue one way or the other. But clearly there are important nonproliferation principles involved, and these are going to have to be adhered to. Clearly, from the Indian point of view they don't want to restrain or roll back on their nuclear program. So how you deal with this issue is very complicated.

What are the major problems or roadblocks you see in consummating this agreement?

We define nonproliferation in different ways -- the Indians point to their great record of not transferring nuclear technologies and also, of course, point to Pakistan and China.

For many Americans, the fact that India went nuclear is a nonproliferation disaster. I don't share that passion, but clearly it did some damage to the nonproliferation regime. Whether it is justified or not is another question, but India cannot simply say they are great on nonproliferation because in fact they were a major proliferator.

So this is going to be one of the big obstacles to this agreement.

You argue that you are in favour of the agreement, although you mention these caveats. How then do you feel about the stance taken by several of your colleagues, particularly those who constitute the nonproliferation lobby and the nuclear establishment, which is one of total opposition to the deal?

All of us have to wait and see what Congress does because that will in fact define the agreement. When Congress changes the law, how it changes the law will be a factor. So obviously, if Congress somehow abandons nonproliferation interests, I believe that would be a disaster.

India will pursue an independent course and so, that's why I think it's important to see what Congress will turn up -- and we got a dose of it at the hearing about India's relations with Iran.

What I am concerned with is what I've heard from some Indians, that they don't have to do anything more; that their nonproliferation record is great; that this new law they have passed is perfect and that the ball is in our court. That may be underestimating the issue and the problem.

Incidentally, what are your thoughts on the non-proliferation law the Indian Parliament recently passed?

I haven't read the law and so I can't really comment on the provisions in detail -- but that story in your newspaper (India Abroad, the legendary newspaper published from New York which is owned by rediff.com) was very revealing in perhaps this, that the legislation was not carefully thought through. I believe there will be an interesting debate in Congress as to what changes should be put in the law.

My own view is that it should be written in a way that it could bring in other countries, especially Pakistan and Israel, and get more of their facilities under international inspection. And I believe one of the key issues is how big a nuclear weapons programme India wants to have and how rigid the barrier will be between civil and military.

You can't pour water in the bucket and then have it pour out into another bucket -- that's not going to work. So India is going to have to erect a really tall and impermeable wall between its military and civil programmes.

You have implied in some fora that the Bush administration, with this one big idea, has miscalculated India's abilities or even intent to keep its side of the bargain.

I have no way of knowing. They didn't ask me. I didn't tell them. But what I've said is that you have both the Indian Right and the Indian Left opposed to this agreement. So I am just not sure whether this government can push it through or not.

But then again, I am not sure whether Bush can push it through here -- and that's why I have said the whole relationship shouldn't hinge upon this one agreement, even though it is a very important agreement.

For example, the Indians themselves have invested heavily in Chinese software and Chinese high-tech, yet when China tried to invest in the Indian high-technology industry, it was opposed by the Indian security and intelligence people although the Indian commercial people are all for it.

So this raises a whole lot of questions about India and China, and these are some of the ambiguities about India's rise that have to be addressed both by the US and China and, of course, India.