My last column about India going indie brought with it a spate of very interesting feedback -- thanks much, people, nothing quite like opening up a wormy can of debate -- about independent cinema, while tossing up the issue of new boundaries and experimentation.

Truly, we are now pushing the envelope. Anurag Kashyap's No Smoking is the kind of bizarrely whimsical film that few of us would have envisioned making it to theatres, lesser still with a cast headlined by pinup-lad John Abraham [Images]. Before talking about the film itself, applause must be given to producers Vishal Bhardwaj and Kumar Mangat for letting Kashyap out on this wholly independent limb. Similar claps also for Sony Pictures, giving oodles of cash to Sanjay Leela Bhansali [Images] for his Saawariya [Images] -- already discussed at length in my review.

Hang on, I hear some of you gasp, did I just equate the Black maker and the Black Friday maker? Yup. While the latter's loathing for the former is legendary, the fact remains that they are currently being kicked -- easy to do since they're down -- for writing their own ticket, for doing entirely their own thing, for presenting to the world their wholly unique vision of it, the rest of us be darned.

In that respect, No Smoking is indubitably an important film. It is an announcement that a film can now be made for that most critical and least commercial audience, a niche of one. It is now possible for Indian directors to indulge themselves to the fullest, draw up their own trip and invite us in.

It would, of course, have been far nicer had No Smoking also been a good film. More grad-school than multiplex, this is a peculiar sensory-overload bombardment of random imagery, intentionally abstruse in an effort to flummox. And to frustrate. Critics have been merciless, while there is a throbbing vein of counterpoint, especially visible on the Internet. It has, as a cinephile buddy pointed out, polarised critics and bloggers and generated actual debate. And when last did a Hindi film do that? Another reviewer pal pointed out that hasn't had this genre, and that this is a true 'mind-freak' film (am using a rather pathetic toned-down term, you understand.)

Personally, I'm devastated by the waste. For all that hoo-ha about originality, Kashyap's lifted Stephen King's cleverly macabre short story Quitters Inc -- filmed also in the 3-story movie, Cat's Eye -- and gone completely overboard while trying to make it his own. I'm all for out-there treatment, but the basic problem with No Smoking is that there is zero flow. With all the consistency of a music video, Kashyap makes this almost David Lynch like effort, sticking together a confusing sequence of sporadic clips. Even this collection of back-to-back takes on Anurag's enviable DVD collection could have been fun, had he not been flicking ideas, technique (and in the case of Lost, even background score, I'm informed) from various cinematic sources, including the aforementioned Lynch.

The counterpoint seethes at this reaction, saying we are far more charitable to mind-freak movies that come with subtitles. Point. I'm confident a few of us might have said nice things about No Smoking were it Korean with rudimentary English translations at the bottom of the screen, but so what? That's a whole different bit of pretension, and isn't justified either. The point is that while there are several completely incoherent movies we rave about, we do so for a reason. They overwhelm us, they make our jaws drop, they make us throw our head back and go 'Whoa.' It might all be in the treatment, the visuals, or three spectacular lines of twisty last-scene dialogue, but we love it because we're blown. 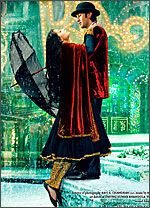 Anurag's film doesn't do this; it leaves you cold. I'm all for self-indulgent filmmakers -- heck, I love 'em, just ask anyone in earshot while I'm raving about Woody Allen or Tarantino -- but they need to prove their genius while feeding their narcissism. This isn't the film that earns Anurag the stripes he needs to go this ad hoc, to stay this wild. Every now and then there is a genuinely clever scene in No Smoking -- I love the laughtrack'd sepia flashback -- but used in isolation it comes off as just another gimmick.

And then there's the money. It's all well and good to say 'Art for art's sake', but irresponsibly selfish when There's Money At Stake. Someone else's money, that is. Stop comparing movies to paintings, at least till filmmakers fund their own projects. There's a fine line between courage and recklessness, and -- at a time when we desperately need producers to back experimental cinema -- Sony Pictures and Bhardwaj are both likely to be wary of loony projects in the future, which is a shame.

Oh, and I almost forgot: The Fountainhead argument. Kashyap groupies have been harping about the fact that No Smoking is a metaphor for Anurag's life, about how K-for-Kashyap lives by his own rules and his own arrogance, and is punished as a result (Oh, how totally Naach a tactic, this -- and that film was bitterly honest). And if we do accept this martyred insight, we're worse off. K is a character with no redeeming qualities whatsoever, a selfish bastard without a soupcon of grief at his wife's death, one who gets his brother killed to convince a couple of tough cops of his own innocence. Neat-o. So is Anurag saying we should all be repelled by him? I doubt it.

It might have worked even if he'd just stuck to the story. Quitters Inc is a tight thriller, and played that through Kashyap's kaleidoscopically zany style, it should have been a breezy, unpredictable watch. Here the problem is with meaning. Suddenly Anurag, in an unwise attempt to substantiate his weirdness, has applied a few layers of meaning, added some soul to the smoke. Except -- like in Matrix Reloaded -- he doesn't really have that much to say. At least not enough of a point to last that two hour limit, not to mention the inexplicable last 20 minutes. So there is then this Emperor's-New-Clothes style of filmmaking, where the filmmaker deliberately sets out to confuse, paints a faux-intellectual picture, and stands back smugly, pretending to be proud.

As with Bhansali's Black, Saawariya and Kashyap's new film, there are people who scratch their chins thoughtfully and accord meaning to the meaningless, taking it unto themselves to visualise velvet waistcoats, silk cravats and white linen suits. While daft movies dance nakedly down the aisle.