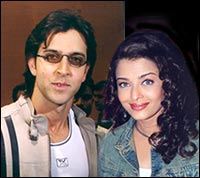 It's official now: Hrithik Roshan [Images] and Aishwarya Rai [Images] will be teamed together for the first time in the much speculated sequel to the 2004 success, Dhoom.

Says Sanjeev Kohli, CEO, Yashraj Films, "We've been in talks with Aishwarya and Hrithik for a while. We've now finalised them for Dhoom 2 [Images], which Sanjay Gadhvi will again direct. The two are cast in very different roles and are obviously among the USPs of the film. The fact that they have never appeared together before adds to the film's equity value. We hope to make the sequel of Dhoom far more attractive than the earlier instalment."

Though he has hurt his forearm, Hrithik is thrilled about his villainous turn in the film. "I've played the good guy long enough. Now, it's time for me to get evil!" he laughs. "It's cool to play a baddie. I always wanted to play a cool villain. And since the bad guy in Dhoom 2 is multi-dimensional, I'll have so much more fun with my characters. Playing this nightmarish guy is one of my dreams come true."

The film, a hi-tech thriller with a profusion of special effects and action-oriented spectacles promises to be "bigger, costlier, and more in-your-face than Dhoom!"

Hrithik and Ash have been missing the chance of coming together for a while now. Just after the release of Kaho Na�Pyaar Hai, the two were slated for a love story set against a war backdrop, about a nurse and a soldier to be directed by Tanuja Chandra.

More recently, Hrithik and Ash were all but signed together to co-star in Rakesh Roshan's sequel to Koi�Mil Gaya.

With the Khans being out of her orbit, Aishwarya is desperately in need of dependable and saleable heroes. As she once said, "How many films can I do with Ajay Devgan [Images] and Sanjay Dutt [Images]?"

Hrithik would be an interesting co-star for Ash, especially since they'd both go into mean mode for Dhoom 2.

Interestingly, after the item appearance with the Amitabh [Images] and Abhishek Bachchan [Images] in Bunty Aur Babli [Images], Dhoom 2 would be another major step back into Yashraj Films for Ash.