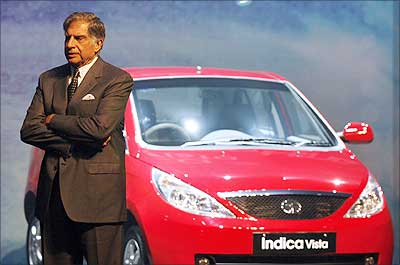 Tata Motors, the company that got into making of passenger cars about 10 years ago, launched Indica Vista, the next generation of its pioneer car Indica, to enhance its market share in the most competitive hatchback segment.

The New Indica will replace seven out of the 14 variants of the existing Indica. The company plans to start export of its new car in around six months.

The entry-level petrol variant of Indica Vista has been priced at Rs 349,000 ex- showroom Delhi. Indica was the second-largest selling model in the Indian car market in 2007-08. In the last 10 years, the company has made about 900,000 Indica cars.

"We expect to sell more cars with the new generation of Indica," said Dube, who did not wish to disclose sales target.

The company has invested Rs 1,700 crore (Rs 17 billion) in various facilities that will make new line of products including the new Indica, new Indigo and some of other joint venture products with Fiat. It took almost three and half to four months for Tata Motors to develop the new car.

The company is also the largest truck maker in India.

Image: Ratan Tata, poses with the Indica Vista in Mumbai